ROI Is an Elusive Beast! 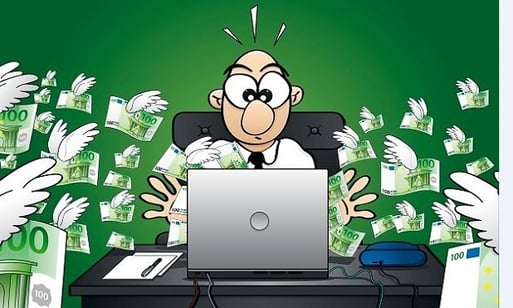 More often than not in business we know what needs to be done for the business to survive and gain continued success. Most senior leaders I work with are very committed to the idea of change, and with budget strings having loosened in the last 9 to 12 months - more time and effort being spent on building new strategies and developing more cost effective solutions - there has been a push towards getting real value from investment in new technologies, only to see the implementation fail in practice!

So what lies beneath the surface of this poor track record - not achieving change project implementation and ROIs? Here are some re-occurring themes that I’m hearing: -

… all the above result in change initiatives being installed, rather than implemented. The diagram below illustrates this perfectly and includes all the organisational costs associated with it. 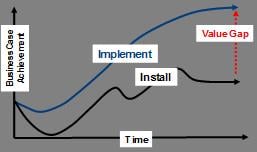 McKinsey highlighted this effect over a decade ago with their 2002 study of 40  large scale industrial change projects. They identified that projects paired with “excellent” change management extracted circa 143% ROI, versus only 35% from projects with little, no or poor change management. So we can conclude that well managed change, in the context of effective program management, supports realisation of program objectives, which in turn indirectly maximises ROI.

As project and program management capability continued to progress in that time frame, PMI reminded us last year of the loss to investment ratio still playing out on major projects. In their Pulse of the Profession report “The High Cost of Low Performance” it was highlighted that organisations were losing USD109 million for every USD1 billion invested due to poor project performance. When looking specifically at strategic initiatives, contributors to this report highlighted that only 52% of these business critical initiatives were successful. We all know that the failure of strategic initiatives has a significantly greater financial impact, according to PMI, it’s almost 15% of every dollar spent on strategic initiatives which is lost, circa USD149 million of every USD1 billion spent.

Perhaps we like PMI’s numbers better - they are a bit more conservative and probably relate to a wider spread of small, medium and large organisations, and/or maybe we are becoming desensitised to this re-occurring narrative - but for a global senior leadership team I recently worked with, these numbers started to take on real meaning.

Here is a summary of our conversations: -

We force-ranked some 1,400 change projects in their system at a particular point in time. We then went on to estimate an average of USD50,000 investment per project in terms of employee time, resources and training etc. = USD70 million.

For a large blue chip organisation there is a lot of innovation and development that USD75 million could fund! My calculations are rough and dirty, but I’m curious to know how you are calculating the value gap that your organisation is currently carrying.